About the colour and clarity of olive oil

All over the world, from Italy to California, official jury members of Olive Oil tasting contests must use blue tinted tasting glasses, closed by hand with a watch glass, to judge the quality of Olive Oil. Why a blue glass? Because the International Olive Oil Council (IOOC) ruled that no jury member should be influenced by the colour or the clarity of the olive oil, being of no consequence to its quality. Although it is true that a very fruity olive oil is associated with a green colour and a golden yellow oil will usually have a neutral almost sweet taste, both olive oils could be judged top quality according to international rules. 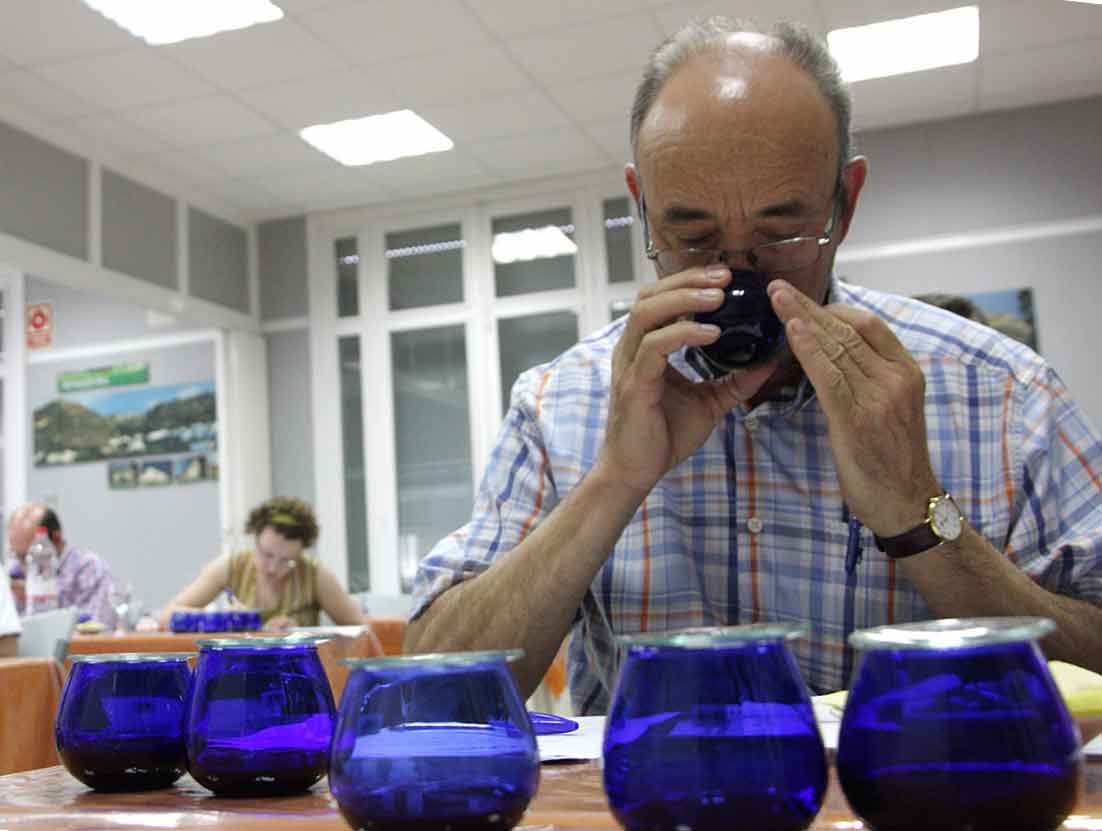 Olive oil can vary in colour from dark green to golden yellow and even brown, and there are two important factors that will greatly determine the colour and taste of fresh olive oil.

Olives are always greenest when they are young. This phenomenon is caused by a high content of a natural green pigment called chlorophyll as well as a massive quantity of natural chemical anti-oxidants called poly-phenols. While the chlorophyll, through photosynthesis, allows the plant to absorb energy from light, the poly-phenols are providing a bitter taste to the fruits, thereby staving off early predators, like insects and birds. Water makes up for about 60% of the weight of a young olive. In most Mediterranean countries it is the second half of October.

About 90 days later this picture changes completely. The chlorophyll has been spent and the poly-phenols have gone. Almost all of the water has evaporated through the skin, leaving a dark purple or black olive shriveled like a raisin. The taste is sweetish, inviting birds to pick and eat the fruits and take care of olive procreation by dropping the seeds in far places. One substance remains more or less undiminished: the olive oil. That is to say for quantity, not taste and colour. The fruity aroma of October has changed into the very neutral, almost sweet taste of January. The colour has gone dark-yellow or brownish. The winner is the farmer because he pays 50% less of harvesting fees to his pickers, who are paid by weight. The looser is the consumer interested in a fruity olive oil with a bite full of anti-oxidants. These differences in taste, because of the moment of harvesting, are also noticeable in our olive oils: 100% Arbequina and Organic Extraction are early, Organic Stone Mill is medium late.

All fresh olive oil is cloudy. That is because minuscule particles of fruit escape with the oil during the pressing. Most producers will quickly remove those using artificial filters, but with the disadvantage that some of the original scent and flavour will disappear along with the bits of pulp.

Many connoisseurs actually prefer cloudy olive oil. That is why Can Solivera has chosen not to use filters and to let nature do the work. If the oil is allowed to rest at room temperature for a longer period (2 to 3 months), the particles will gradually sink to the bottom and the oil will become clear.

Olive oil that is pressed, using a traditional stone mill and straw mats, has more fruit particles than when it is centrifuged. Therefore, it can take longer, up to half a year, before it clears up. The residue on the bottom of the bottle is normal and by no means unhealthy.