The legend of Arbequina

There are hundreds of different varieties of olive trees in the world, each with its own peculiarities such as growing conditions and the shape, color, texture and taste of their fruits. Of course all of these varieties are as old as the world, but late last century a completely forgotten olive tree was found again near the small village of Arbeca (formerly Arbequa) in Spanish Catalonia.

It looked strange like a shrub and produced very small, round and colorful olives. Botanists dubbed the newly re-discovered olive tree “Arbequino”, which meant ‘inhabitant of Arbeca’..As fruits are mostly female in Spanish the resulting olive oil was called “Arbequina”.

Looking further and higher in the mountains, researchers found many of them, obviously planted a long time ago. 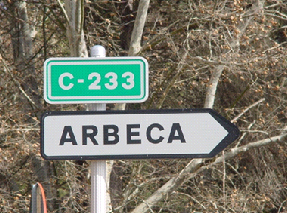 During the 17th Century, the Duke of Medinaceli - who owned a vast area of the Iberian Peninsula including Arbequa (now Arbeca) - made a visit to Jerusalem. There he became enchanted by the taste of an extraordinary olive oil, unknown to him. He brought the seeds of these olives back to Spain and told his farmers to plant them for oil. And so it remained for several centuries.

However, starting middle 19th century the groves were gradually abandoned. People consumed much less olive oil because of the invention of electricity (no more oil lamps) and Arbequina olives could no longer compete in the industrializing world (think of soap) against much higher yielding varieties such as Picual.

In spite of its rather pungent taste, Picual became dominant in Spain. The same happened in Italy where the bitter tasting, but high yielding Frantoia became the olive oil variety of choice. Arbequina disappeared... until recently when the small, round and colorful olives made a spectacular come-back. The difference proved to be a new generation of affluent customers, willing to compensate the farmer for producing olive oil with a fabulous taste (the Duke was right!)

The majority of the Spanish Arbequina harvest is bought each year by Italian olive oil producers. The oil forms the core component in numerous exclusive blends, that are exported from Italy to every corner of the world. Meanwhile, Arbequina has become the reference for newly planted olive trees in the New World: New Zealand, Australia, South Africa and Chile and there is great interest as well from India and China.